Rlburnside said:
45mph-50mph is gale force 9, I can hardly think anyone could play golf in that.
Click to expand...
I was going by the BBC forecast. It was the strongest wind I can remember playing in.

rudebhoy said:
I was going by the BBC forecast. It was the strongest wind I can remember playing in.
Click to expand...
50mph??
Where was that, in the Atlantic? 🙂

rudebhoy said:
I was going by the BBC forecast. It was the strongest wind I can remember playing in.
Click to expand...
BBC forecast is not always the best I use XCW forecast and that was forecasting 35mph winds gusting to 40 mph down your way, still a lot of wind to play in and not easy 👍

Traminator said:
50mph??
Where was that, in the Atlantic? 🙂
Click to expand...
North Sea actually, currently 45mph

Pretty brutal at times in the wind and it did for this silver birch on our 7th.
Repeat of last Friday, dormy 2 down and halved the match on the last 😃 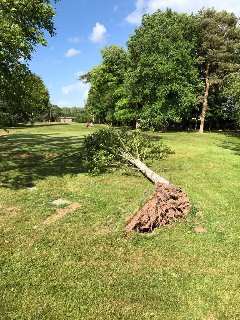 View attachment 30797
Click to expand...
Been like this all day on West Cumbrian coast and will be all day tomorrow.

Silloth would be unplayable today.

Played my first 18 in a long time with @2blue today at Wike Ridge in Leeds. Shot +15 which I’ll take as it’s my best round in about four years and had a great laugh with Dave, even being stuck behind the slowest single player I’ve ever witnessed for the last four holes!
B

rudebhoy said:
I was going by the BBC forecast. It was the strongest wind I can remember playing in.
Click to expand...
Magic Seaweed is a good website also, we use it for rig moves 👍🏻

richart said:
Joined the club with an 11.0 handicap, twelve years ago, and now off 10.8. Coming down nicely. Think I might have found my level, and at my age it is more about holding onto what you've got.
Click to expand...
You should take on Homer in a challenge to get to single figures

Tricky out there is strong wind. Thought I hit it better than I scored but did lose the plot over the last few holes along with my swing. Was only 1 over handicap playing ninth. Nailed a three wood second into the teeth of the wind. Clipped the smallest branch and never saw it again. All good until 12 when tee shot was too straight and then two OOB on 16. Short game and putting improved but still room for improvement so hoping less wind over the weekend means better scores. Feels close and still glass half full

drive4show said:
You should take on Homer in a challenge to get to single figures
Click to expand...
I'm busy getting ready to out a spanner in the YOTF at H4H. Some may argue I'm a spent force anyway and Rich tells me he's a quality ball striker

I think I played foursomes with myself aged about 12 today.
A mixture of pretty good and "how the heck did that happen?".

Today's random partner lucky dip threw up a good lad off 4, so a pretty good day out to be fair.
R


drive4show said:
You should take on Homer in a challenge to get to single figures
Click to expand...
At the rate I am coming down, I will need to live to 150 to get back to single figures.

At the rate I am coming down, I will need to live to 150 to get back to single figures.[/QUOTE]

At least you’ll be able to shoot your age then 😂😂😎

First round for two months, down at Haste Hill. Just took a half set to keep it simple (D, 20°h, 7, 9, 50°, 56°, Pt). Few spots of rain during the first four or five holes but none after that. Very breezy but nowhere near unplayably bad. Temperature was nice, shorts and t-shirt all the way once the rain vanished.

I shot 84 for 36 points! Like I'd never been away. I always said practising is overrated. Thinned the tits off the first tee shot with the 7i, but managed to get up and down for par. Driver was good right from the off, then a couple of slices crept in, but got it back to being good by the end. One blob on the 9th caused by a slice, lost the ball and couldn't recover to score. Back nine of 40 was really good though. Seven pars today, but five of them in the last eight holes. Delighted to be back on the course and to actually play well.

It was strange being sort of thrust into summer golf with no adjustment period, got loads of bounce and roll on a few drives which is always nice. Trying to get the pace of the greens wasn't easy (although they weren't in fabulous condition either).

Our course is doing 16 minute intervals, but somehow we still had someone on our fairway on the 2nd hole as we were teeing off. How is it possible? Thought maybe they'd teed off late but the guy outside said if you're late you don't get on because they need to maintain the gaps. So that was weird. They actually sped up so didn't really hold us up too much, but I just couldn't work out why they were only there with the 16 min gaps.

Very windy again today and abject. Very poor tee to green especially with irons even those on the fairway. Distance down badly and swing messy. Short game good, putting bad. Fed up but try again tomorrow. At least I didn't get wet

Tough conditions with 40mph gusts - and I am normally very poor in the wind,. But, a purple-patch 7 days of golf ends on a high. Last Sunday shot second best round ever - 5 over (off 16!), played on my own on Thursday - not properly scoring but certainly better than handicap.

And today - took on my brother at matchplay. He is off 5 and was giving it the big one about playing well and was going to do me! Well, I missed a putt on 12, which would have handed me a dog licence!! But won 6 and 5

Lovely 8 iron into 18 - kept in 5 foot below the hole - but would have missed the birdie if the cup was the size of a football!!!

On ominous fall from grace certainly awaites after an unbelivable start!

Another epic battle with my mate with the lead chopping and changing all the way round. Was dormey one giving away a shot but birdied it after hitting wedge down breeze 152 to see him off 2 up . That's 3 on the bounce now
5